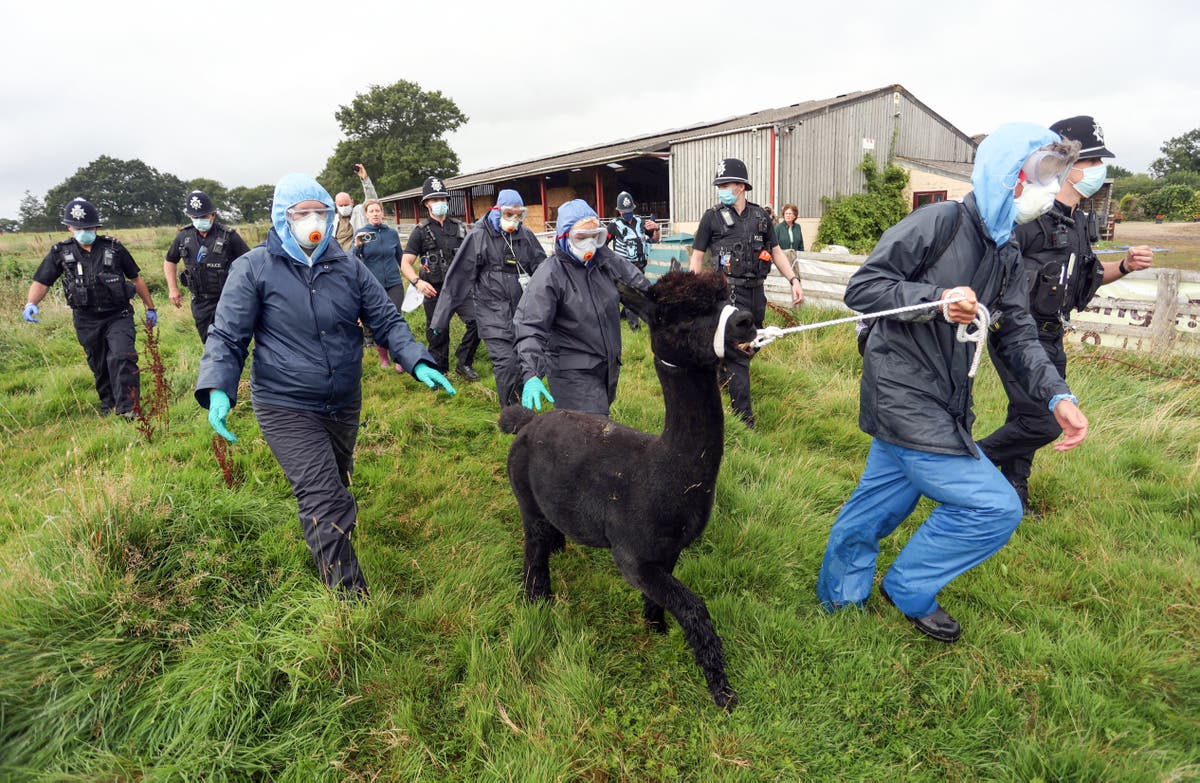 Geronimo the alpaca has been taken from his farm in Gloucestershire and killed by vets enforcing a court warrant issued to prevent the spread of bovine tuberculosis.

Uniformed police helped officials wearing masks, goggles, and blue overalls to take the animal from his pen at the farm in Wickwar.

Reporters and campaigners looked on as the condemned animal was dragged into a horsebox and taken away.

“The infected animal was moved from the premises and euthanised by staff from the Animal and Plant Health Agency (Apha) as a necessary measure to control the spread of bovine tuberculosis,” the Department for Environment, Food, and Rural Affairs (Defra) said in a statement.

Dramatic images showed Geronimo being cornered by four vets in hazmat suits and then led away by a police escort. As the officials transported the animal from the farm, activists, who have been camping nearby for days, shouted “shame on you” and “you’ve got no soul”.

But despite social media pressure from the alpaca’s supporters, Geronimo could not be saved.

“The government has refused to engage in good faith,” she said. “We now know they have been stringing us along for the last week, fobbing us off by saying that people were on holiday and would get back to us this week.

“Now we know that they were not only ignoring our consistent pleas for constructive dialogue but had no intention of engaging with us.

“In fact, all the time, they were simply planning to murder Geronimo. This is yet another appalling demonstration of bad faith and duplicity by the secretary of state and everyone at Defra.”

Defra was granted a warrant to euthanise the alpaca within 30 days of 5 August, but Ms Macdonald claimed the testing was flawed and that her animal was healthy.

Webcam footage showed Geronimo making a break for freedom and running into a field to join his fellow alpacas.

Several officers followed him with a rope, chased the pack around the meadow, and finally led Geronimo back into his barn.

Defra chief vet Christine Middlemiss said: “This is a terribly sad situation and our sympathies remain with all those affected by this devastating disease.

“No one wants to have to cull infected animals if it can be avoided, but we need to follow the scientific evidence and cull animals that have tested positive for TB to minimise spread of this insidious disease and ultimately eradicate the biggest threat to animal health in this country.

“Not only is this essential to protect the livelihoods of our farming industry and rural communities, but it is also necessary to avoid more TB cases in humans.”

The prime minister’s spokesperson said: “It’s obviously highly distressing for someone to lose animals to TB and that’s a situation that farmers sadly have to face.”

“Our sympathies are with Ms Macdonald and any others that are affected by this terrible disease.”

But Ms Macdonald retorted: “Boris apparently is sympathetic – well I don’t need his sympathy. I needed him to stop this in its tracks when he had the opportunity and look what’s happened. They’ve decided to take death at all costs instead of learning and science. They should all be out of a job.”

Ms Macdonald also called for Defra to allow an independent witness at the alpaca’s post-mortem examination to confirm if the animal really did have TB.

She added: “Taxpayers have paid for today’s attempt to kill a perfectly healthy animal because they haven’t got the courage or the integrity to do the right thing.

“It’s not my fault they’ve got endemic TB in England. They haven’t done anything with it for decades. He came from New Zealand, he was perfectly healthy and they misused the test.”

Animal lovers reacted to the distressing news, with Susie Kenward tweeting: “I witnessed them dragging him away live on the webcam… I’m so very distressed for Geronimo and you Helen..xx”

Another, Heather McKenna, said: “Barricade him. Don’t let them do this!”

Animal campaigner, Dominic Dyer, said: “My thoughts are with Helen Macdonald one of the most bravest and courageous people I know that fought a David and Goliath battle with Defra to save the life of her precious Geronimo.”

Veterinary surgeon Dr Iain McGill condemned Defra’s actions saying it was “the biggest PR distaster” the department “has ever made”.

Meanwhile, Avon and Somerset Police said: “We can confirm officers are in attendance at a farm in the Wickwar area of South Gloucestershire this morning to support the Animal and Plant Health Agency, who are executing a court warrant.

“We’ll always support our partner agencies to carry out their lawful duties, and our role is to prevent a breach of the peace and to ensure public safety is protected.”