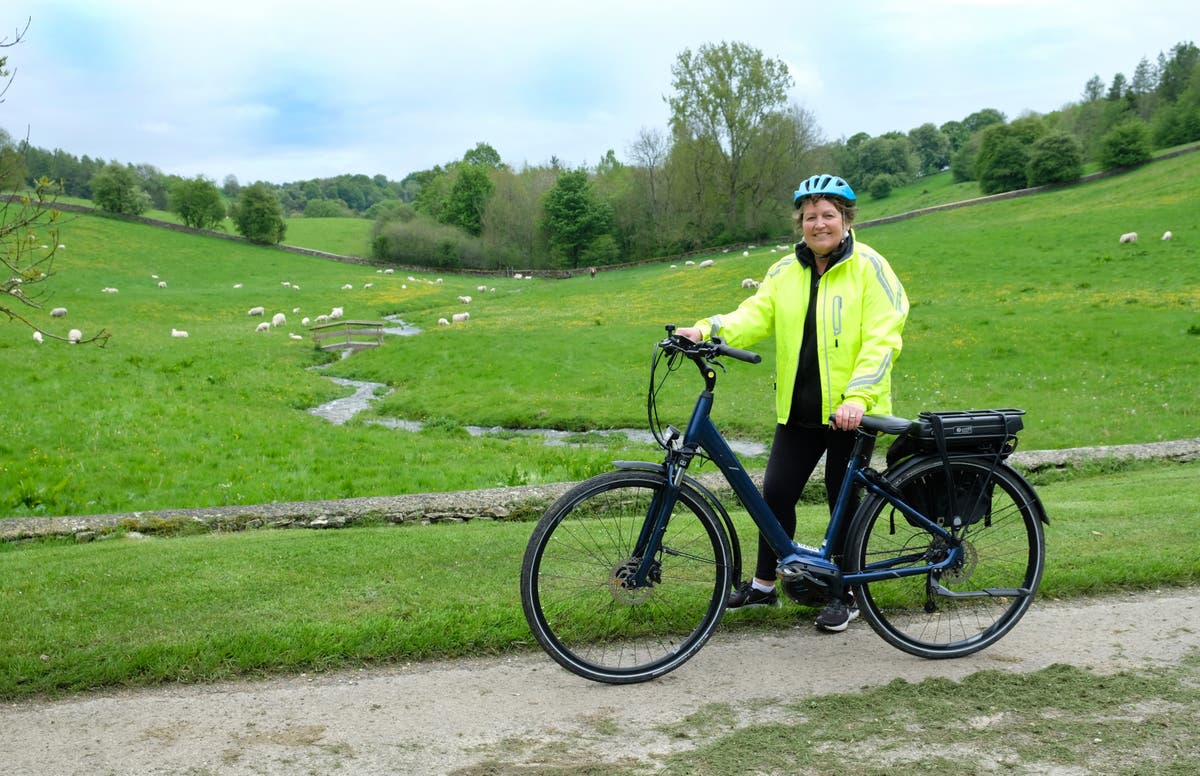 “Cheat!” I hear my grown-up children exclaim as I sheepishly inform them that I will be getting a little battery assistance on a cycling excursion in the Cotswolds

Indeed, until a few years ago cycling purists and gym addicts may well have held that view, admits James Milner managing director of Wild Carrot (wildcarrot.co.uk), an eco-adventure tour company which runs guided eBike tours and glamping experiences in the Cotswolds.

“There used to be a stigma attached to it, that eBikes were for old or unfit people, but that has largely gone. We are getting lots of couples and groups who want to try them out,” says Milner at the company HQ at Manor Farm Barn on the historic Chavenage House Elizabethan estate in Tetbury, Gloucestershire

“Only 5% of bike owners ride once a week – that means that 95% of bikes aren’t being ridden regularly,” he points out. “We introduced eBikes mainly because of the hills, just to give people extra freedom.”

With an eye on sustainable energy, the hybrid eBikes are solar powered – charged by the company’s solar panels (unless you run out of juice over a longer time, in which case you can plug the Tesla batteries into an electric socket) – and of course, they’re not pumping out CO2.

I had long eschewed the idea of what I perceive as a challenging cycling holiday (steep and sweaty). The inevitable humiliation of being overtaken by an intimidating snake of over-zealous road-bikers in designer Lycra and clipped-in shoes, heads down, calf muscles rippling, had me wobbling before I’d even sat on a saddle.

My husband, a keen cyclist, gently observed that some of his cycling pals of a certain age had converted to eBikes to give them freedom to go further without being completely exhausted by the end of the ride.

So, on the condition we could stay at a luxury country hotel to go back to after my introduction to assisted cycling, I was persuaded to try a new ‘Cycle & Stay’ package which includes eBike hire offered by The Painswick Hotel, part of the Calcot Collection, in the sleepy Cotswolds village of Painswick, near Stroud.

The hotel proved a great bargaining tool. Originally built in the 18th century at the height of the wool trade, this rather grand Palladian-style building was converted into the village’s vicarage in 1897.

In the restaurant, with its traditional parquet flooring, wood-panelling and muted grey and cream paintwork, you can still see the old wooden door through which children would enter for Sunday school.

Barmen mix drinks in the little cocktail bar in the tiny former chapel, which you can take into either of the two lounges with welcoming real fires and deep sofas to sink into.

The hotel features 17 rooms (during the pandemic they converted the spa into an extra bedroom because of Covid restrictions), all named after former woollen mills in the area, overlooking the lush Painswick Valley.

Painswick is situated in the south Cotswolds, a less well-trodden tourist path than the celebrity haunts of better-known chocolate-box towns such as Bourton-on-the-Water, Moreton-in-Marsh and Stow-on-the-Wold, yet pretty nearby villages such as Slad – whose main pub The Woolpack was poet Laurie Lee’s local – and Bibury, with its famous Arlington Row 17th century weavers’ cottages, have a quieter, more tranquil feel.

It’s an excellent base from which to explore local attractions, including Painswick Rococo Garden (rococogarden.org.uk), originally created in the 18th century which has since been restored to its original glory, featuring flamboyant garden buildings, wooded walks and an impressive kitchen garden in the centre.

Once ensconced and well fed – the small but perfectly formed hotel menus include dishes like Wye Valley asparagus and Cotswold rack of lamb, with options of local wine from Woodchester Valley, a vineyard and winery which you can visit – I’m ready for my eBike adventure.

Milner’s guided eBike tours will accommodate the interests of the guests, whether it’s Roman history (passing Chedworth Roman Villa), fossil discovery (his company actually partnered with an archaeologist as a surprise for one group) or famous TV landmarks such as Chavenage House, which was filmed for Poldark, or the landscapes that featured in the historical drama Lark Rise To Candleford.

I choose to explore the path of the royals – apparently a great pull for the Americans – namely, Highgrove, the country home of the Prince of Wales, to one side of Chavenage, and Gatcombe Park, home of the Princess Royal, to the other.

But first, negotiating the eBike. It can do around 80 miles on one charge, I’m told. Gears are the same as normal bike gears and then there’s the adjustable up and down button on the handlebar for the extra battery oomph.

Whatever help you need, though, you do have to keep pedalling – and if you find yourself at speed, the battery will cut out when you reach 15mph for safety reasons.

“People who haven’t cycled since they were kids feel that childhood freedom again, the freedom you get when you learn to ride a bike,” Milner enthuses.

For me, it feels like the helping hand in the back that I got from my dad to gain momentum when I first learned to ride a bike.

I understand the purists’ view. Throughout the 24 miles we do on minor roads (it is not an off-road tour but the roads we travel on are very quiet), I don’t break a sweat, yet cover much more ground comfortably than I could have on a regular bike and appreciate the great outdoors more than I would have done had I been focused on getting up that next rolling hill. It is, after all, a holiday, not the Tour de France.

We stop en route to just take in the natural beauty – fields of zingy yellow rape, the distinctive call of a skylark, the mesmeric weaving flight of a pair of swifts, the aroma of wild garlic. These are stand-still, unhurried moments to savour.

Cycling around the perimeter of Highgrove you can’t see an awful lot because of the high wall and hedging surrounding the estate – the company can arrange a grounds tour but you need to book at least six months in advance – so we move on to the polo fields where Prince Charles and his sons William and Harry played, stopping every now and then while our guide shares snippets of history and points out local landmarks.

On the cycle back, we stop at Hookshouse Pottery in Westonbirt. It’s a small place, not really big enough for a coach party, just right for a trio of bikes.

The genial potter, Christopher White, mentions that his wife, Lise, is about to open her garden up to the public as she does every year for the National Garden Scheme, raising money for health charities, and offers us a preview.

It’s a cornucopia of horticultural excellence, a one-and-a-half acre sensory treat with borders about to burst into flower, a woodland area and an impressive pond. If we’d been in a car we wouldn’t have seen it.

But on a bike, be it an eBike or a regular cycle, there’s more chance of finding the nooks and crannies of country life and engaging with the community.

“The best feeling,” Milner observes with a twinkle in his eye, “is when you get to overtake the road bikers in all their pro gear going up those hills.”

I’ve learned to dismiss all those taunts from my children – and intend from now on just to sit back and enjoy the ride.

How to plan your tripThe two-night Cycle & Stay package at The Painswick (thepainswick.co.uk) starts from £286 per night and includes breakfast and eBike hire from Wild Carrot for 24 hours (additional days hire is available for £60 per eBike). Available daily throughout 2021.