A father-of-five from Stroud was rushed to intensive care with Covid-19 despite testing negative just five days before.

David Martin-Goff, 52, a former patient coordinator at Gloucestershire Royal Hospital, was given a 60 per cent chance of survival by the colleagues he once worked with.

He watched other patients dying around him in the ICU and wondered if he might never see his family again.

“I owe the staff my life, I really do. They worked to the bone for everyone in there.

“I cannot compliment them more. They were the family that I was missing.”

“I don’t think the testing is right and this just proves that. I was having symptoms and I was being told I didn’t have Covid and I could go out and I think that’s dangerous.

“I could have been spreading it like wildfire, but I didn’t because I knew myself that I was ill.”

No Covid test is 100 per cent reliable and the results are only relevant to the point in time the test was taken, according to the Government’s website.

By December 14, David said he was coughing so much he was nearly sick, and he was taken to the Gloucester Royal Hospital’s Covid ward with a chest infection and low oxygen.

“I was scared then because it was all becoming real. The place was absolutely packed, it was a bit surreal,” he said.

Two days later he was phoning his family to say he was being taken to the ICU and might not return.

“I couldn’t stay in the conversation because I was absolutely distraught.

“There’s nothing more that you want from someone than a hug or someone to hold your hand, but I had none of that. I was there on my own.”

David said four different machines were used to treat his oxygen levels, that he was taking tens of tablets a day and had needles stuck in his arms and hands.

He said two people died in the beds near to him.

David returned to his home in Leonard Stanley and to Heather, who still suffers from long-covid, on Christmas Eve.

“I turned up at the door and we were just overwhelmed at being able to see eachother again. My wife was absolutely distraught that she might not ever see me again.” 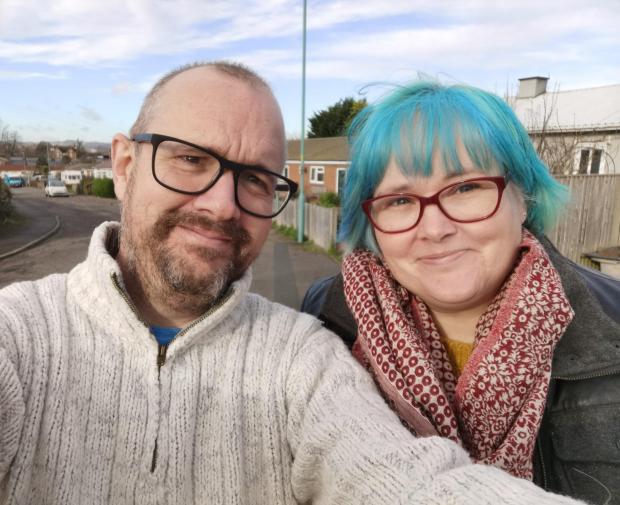 Above: David and Heather on her first walk since contracting Covid-19

David has since spoken out about the importance of lockdown and masks, and of his anger at conspiracy theories.

“You’ve got wards of people dying and someone outside saying it’s not real. It bloody is real.”

“It angers me when you see people in Stroud protesting masks or lockdown.”

“This lockdown is what we need. The longer it goes on the better. I know it effects people financially but people can recover money – they can’t come back from death.”